When asked "What sort of party do you want for your 21st?", Nathanael replied that he'd like a Murder Mystery.

We suggested a Murder Mystery for one of Nat's friend's 21st's, but he didn't go for it in the end (pity Mat: this could have been you!), so we had quite a bit of information to start investigations. There are quite a few people here in Australia that "do" Murder Mystery, but you can't check them all out, so we narrowed ourselves down to:

We finally went with Murder Mystery Parties because you get the game in a box and do it yourself; which was a much cheaper option than getting it hosted for the 50 guests we were intending to have (The people at Host a Murder were very good though and offered a price that was a deal less than their standard price). They had a few varieties to chose from, Nathanael finally went with the Tracey Gang, a 1920's Gangster Party.

After the hard decision of who and how to put the Murder Mystery on was taken, we then had to fill out the game (it came in a box with "everything you need", just add energy and time). Simply, the game is divided into three rounds, during which you have to sort out some means of distributing the 20 clues per round to the guests, the more even the better. We decided on

21st's are a special sort of party, much like weddings, where there is a great diversity of guests that generally benefit from being mixed up. The game recommended 5 teams, which we ended up doing: We wrote the team members on the table cloths (paper) of the 5 tables, and hoped that the teams were fairly even. 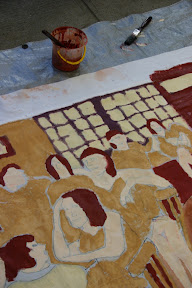 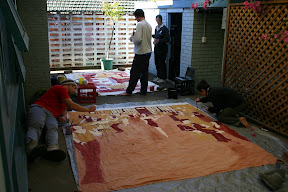 As the theme of the party was a 1920's Gangster Party, Sandi wanted to decorate the hall with some murals that would help set the scene. These were done on an afternoon down at Jesse and Briony's house. We found some scenes that were appropriate and we converted them to a reduced sepia pallet. We'd projected the outlines onto some sheets that were purchased from Vinnies a couple of nights previously, so all we had to do was to use the five different colours to fill in the gaps: painting by numbers (except there weren't any numbers).

Here are the finished murals:

On the day of the party, we had a fairly strict timetable:

I set up a web cam to record the setting up and event. Unfortunately I had to unplug the web cam when setting up the Power Point as the lap top had to move to the middle of the room and I didn't have a USB extension. I used YawCam to take 3 photos 1 second apart every 5 minutes where motion was recorded. Here are the results:
Our Party Pages: